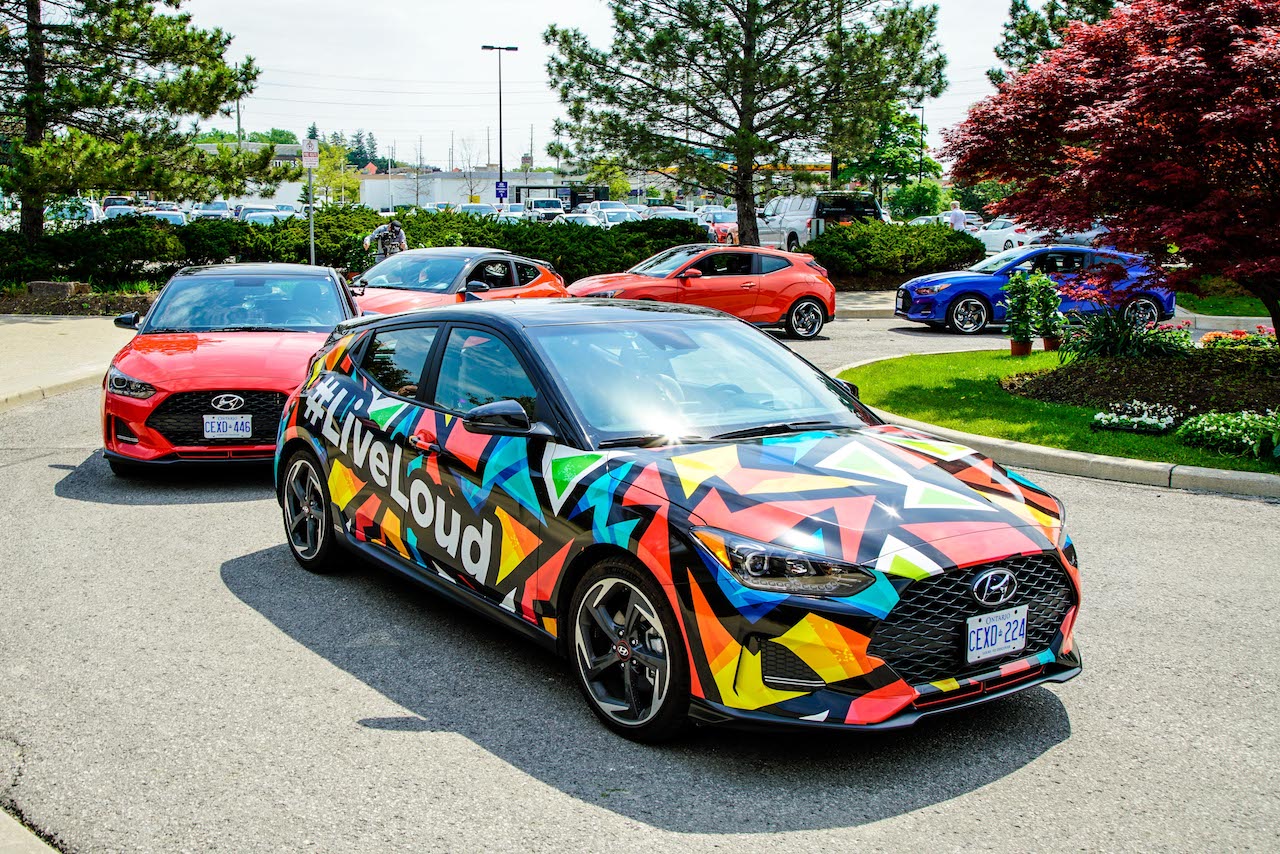 30 May Constantly Using Overboost In The New 2019 Hyundai Veloster

As soon as I heard something called ‘overboost’ mentioned in our briefing at Hyundai Canada Headquarters, it immediately caught my attention.

Over the past weekend, I drove to Hyundai HQ in Markham, Ontario, based on an invitation I got from their team to go for a driving experience with the 2019 Hyundai Veloster.

Sat down with my water and small plate of breakfast and felt like I was back in school, learning all about the new 2019 Hyundai Veloster and its improvements since the first generation produced.

They took us through the packages, differences between competitors and it was at that point I was told about ‘Overboost’, which initiated from Sport mode, just about 60% tilt for the throttle for it to be engaged.

I also learned about other aspects of the 2019 Veloster, the fact that even the base model is loaded with lots of tech, the new more refined design and shaping, the 7-speed dual clutch system, the amount of metallic flake in the different colours, how it holds more in the back with very small adjustments to the overall size. Things that are just good to know in general.

In theory it was all great, but would it translate from paper to the road? I got in, adjusted the seats of this three-door quick hatchback and found myself feeling well-equipped in the driver’s position.

One of the first things I noticed was the fact that there was not much play in the steering while I was driving, something I really like. It seemed almost straight wheel to tire. Other cars I have driven have some play with the steering wheel, it feels like you are getting into your turn and yet, you are still going straight.

The turbo was great too. I found the difference between the non-turbo and turbo is pretty much night and day. You could go out to the Toronto Public Library, take out the entire Harry Potter collection of books, read them all cover to cover and then return them … and that’s how it feels driving a non-turbo when you push it off the line, compared to a turbo. The turbo is that sweet pep in your step that gets your day moving forward from off the line.

The seats were stiff, yet comfortable. I don’t know if I could drive one of my long road trips in the Veloster, but an hour straight of driving was no issue. I liked the car itself but there are certain things about the car I think could be improved further. Traditionally speaking the car was great. The blind spot on the driver side was a bit small, but manageable, and the center console system is somewhat barebones than other cars I’ve tried, especially if used without the aid of Apple Car Play or Android Auto.

Overall, I do like the design of the car.

The profile is a more unique design than what you see on the road, which is something I always encourage for carmakers.

When I was studying Automotive Engineering Technology at McMaster University, we learned a lot about aerodynamics and even how the visual weight of the car affects the buyer’s perception of it. That being said, I feel like the back of the Veloster could be sharper with the spoiler, so it tapers off to an edge. I don’t mind the back, but I think if I was in charge of the next design, I would make the upper half a bit wider with bigger lights.

Out of all of the colours, I would say that the Matte Black and Cobalt Blue are winners for me, the red, I feel, should have had a bit more of a metallic flake to it.

So, my ideal set up would be getting the 2019 Veloster, Turbo engine, including the Tech performance package and DCT transmission (double-clutch) at 201 horsepower. If you are looking for some more juice and power underneath, be sure to follow-up with the Veloster N coming later on this year at 275-horsepower.

The Overboost feature definitely adds that little bit more of fun while driving, especially in Sport Mode. It gas some nice pick up, good sounds, and stable feel to cornering. I do wonder about what the Veloster N would feel like after seeing it in the lobby of the Hyundai HQ building. After test driving the 2019 Hyundai Veloster, I was overall impressed by the driving experience. Usually, new cars distract you with technology, so you don’t notice the ride and drive of the car itself. However, Hyundai, in my opinion, got the bones right for this sporty hatchback. There are some very small things about the car that I personally would change for the next model, but I feel like I would get used to them if driving daily in this car. Overall, it was a great driving experience and if you are looking for a sporty hatchback with more carry space than other hatchbacks in its class, than consider taking the 2019 Hyundai Veloster out for a test drive, starting at $20,999. Thank you to Hyundai Canada for having me on this experience!

For more information, visit the 2019 Hyundai Veloster on their website.